Raising the Standards of the Trucking Industry 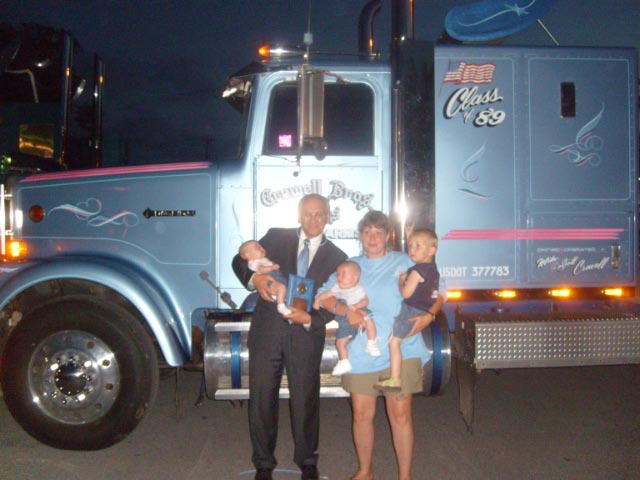 Also scheduled for the 15th is an all out “Call Washington” , expressing the need and desire for more safe truck parking. This will be the second National Call-in, the first was June 28th, 2010.

When we called the Transportation Committee on June 29th 2010, we were discouraged when Todd Kohr told us that Jason’s Law would probably be attached to a bigger bill, the Surface Transportation and Authorization Act (STAA) and also SAFTEA LU funding.  Problem with this is that, Safe Parking will not be a priority if this happens! It’s a way to pacify all of us…. once bills make it into these types of Slush Funds… Little or Nothing Happens!

Today’s Press Release  will explain the history and progress of Jasons Law, HR 2156 and S971, including the phone numbers to call.

Special Thanks to New York  Congressman Paul Tonko for his continuous active role, envisioning the need for more adequate and safe truck parking, and for understanding how it relates to trucker deaths and general public fatalities.

We are asking that you also call Senator Schumer’s office, requesting his further support and encouragement of the bill which he began.

Allen Smith is a 37 year veteran who started at an early age in a household goods family moving business. He began driving straight trucks in 1977 and moved to the big rigs in 1982. His experience within the industry includes; owner operator, company driver, operations manager, and owner of a long distance HHG moving business, taking many of the long haul moves himself when needed. Allen Smith, a truck driver advocate who is driven by the desire to help others succeed within an industry where injustice, unrewarded sacrifice, and lack of respect and recognition exists. Allen and his wife Donna are hosts of Truth About Trucking ”Live” on Blog Talk Radio. Other websites include AskTheTrucker, TruckingSocialMedia, NorthAmericanTruckingALerts, TruthAboutTrucking, and many Social Media websites. In 2011 Allen and Donna hosted the first Truck Driver Social Media Convention, designed to create unity and solutions for the trucking industry. This is now being extended through the North American Trucking Alerts network as those within the industry join forces for the betterment of the industry. Allen strongly supports other industry advocates who are also stepping up to the plate to help those who share honesty, guidance and direction. He believes that all those involved in trucking need to be accountable for their part within the industry, including drivers, carriers, brokers, shippers, receivers, etc… The list of supporters and likeminded people grow daily, networking together and sharing thoughts and ideas for the betterment of trucking. He has coined the popular phrase "Raising the standards of the trucking industry"

View all posts by Allen Smith →

What do you have to say about this? - Be the first!